It takes about a minute from start to finish. The area that softens is only discernible for a radius of around 6 feet but is actually infinitely large — most of its field is beyond your perception. Twenty seconds in you might get a sense of something emerging at the centre of it, gradually taking on substance as the glimmer fades. It’s a woman. Sturdy boots, jeans, a fitted bomber jacket and a beanie hat over short blonde hair, she stands at about five foot five. 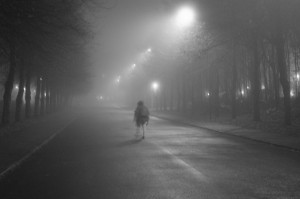 It’s just a haze, it’s not at all dramatic, and if you weren’t looking right at it you might miss it altogether. Everything just shifts out of focus.

It takes about a minute from start to finish. The area that softens is only discernible for a radius of around 6 feet but is actually infinitely large — most of its field is beyond your perception. Twenty seconds in you might get a sense of something emerging at the centre of it, gradually taking on substance as the glimmer fades. It’s a woman. Sturdy boots, jeans, a fitted bomber jacket and a beanie hat over short blonde hair, she stands at about five foot five.

The entire event makes no noise at all except for the sound of the woman vomiting as she collapses onto the floor.

There is a bottle of McCallan Gold prominently displayed on the side table. She pours herself a large whisky, and turns to drink it all in: the whisky, the room – her target’s study.

The desk is the focal point, standing just proud of the Edwardian bay window, the armchair to one side, the side table and the bookcase to the other. Everything in the study speaks to a certain metropolitan aesthetic. The desk, side table and bookcase are in a coordinating light beech. The metalwork, from the desk lamp down to the facing plates on the electrical switches, are a high-shine chrome while the walls are pale-neutral and hung with interesting prints (a lesser known Warhol, a Kandinsky and Picasso’s La Guernica). The fabrics tone together with striking reds. You could get the look of this room from Ikea but this one has never been knowingly oversold.

She turns off the lights and eases herself into the heavy designer armchair to wait.

He was awake but groggy for some time. Then he was aware and angry and probably quite scared. Now he’s quiet, possibly tired but probably receptive. He’s ready.

“I’m not going to take your gag off, and I’m not going to untie you either” she says “until I’ve spoken to you. You won’t believe what I’m going to say, you might even try to pretend it was a dream after we’re done. Do whatever you need to do but one day you’ll realise this was real and what I said was true and then you’ll need to act upon it. You will not be hurt today if you sit still and you listen. Will you listen?”

His body seems to relax a little, resigned to the situation, as he meekly nods at the woman.

She walks away from him and crosses the room. “I see you read” refreshing her whisky at the side-table, then moving on to the bookcase “do you read science fiction?” She runs her finger down the spines. The bookcase boasts the work of Toffler, Fukuyama and Kline. Fiction is represented by Parsons, Garland, Copeland. There is a paperback of ‘Vernon God Little’, it’s uncracked spine suggesting it has not yet been read. “Hmmm… Perhaps not. There’s a book you should read, Stephen Fry, Making History. It’s relevant to what we need to discuss today.

“It’s a pretty generic sci-fi plot really: what would you do if you could invent a time-machine? Kill Hitler, of course! An old trope. It’s been done before. It’s a good book though, do read it if you have time.

“What happens in Fry’s book, in most Kill Hitler stories, is that killing Adolf doesn’t stop the Second World War — if anything it makes things worse. The theory goes that the war happens with or without Hitler because of a whole complex network of things that were going on. So there’s a vacuum and it’ll be filled by whoever gets power at the right time.

“Thing is it’s true,” she tosses back the drink and looks at him, her eyes twinkling with mischief. A stony stare is her reward.

“It’s true that if you invent a time machine, go back in time and try to kill Hitler you will just fuck things up,” she strides back across the room to him, thrusts her face into his. “We know because we tried!” Her eyes flick left to right trying to read his expression. “Poker face. Nice. We can use that. That’s probably why they picked you: composure, grace under pressure, and a good actor.”

She’s up again towards the desk. She props herself nonchalantly against it, and takes up the story based on the notes she was given.

“In the end Hitler was put back into the timeline. We stopped him once and things got worse. We were lucky that we managed to put things back. You see they reckon you get three shots. I don’t know why, I don’t know tech stuff. And we just got it back to where we started on the third go. Which is still awful but – well you don’t want to know about what happened the other way.

“The thing is there’s something happening again and we’re trying to stop it. We need you. You’re Plan B, so you better get it right.

“There’s a rising tide, and we need to stop it. Which is pretty tough going. I bet you’re thinking ‘so kill Hitler already!’ Well now, that’s not very liberal of you.

“As it happens we found him, the Hitler of this story. And we tried to kill him. Didn’t work, he walked away from the accident we planned for him – will plan for him – in 2010 and if anything it made him tougher. Don’t look at me like that! 2010 is my past, but your future.

“So what’s Plan B? Well we’ve had a change of policy, you see. The new Director is against killing. It’s an ethical thing but as it happens I think it makes operational sense too. The killing thing just doesn’t work.

“The thing is you think you can see the problem but you can’t. Time and events, they’re just a haze and if you’re not looking at it right you might miss something. It’s like you’re out in the fog. You have a sense of where some things are from your memory and other things might shine out from the mist but basically you can only see a few feet in front of you but the fog, the mist, is infinite. It just rolls on slowly dissipating but never really finding an edge and most of it is beyond your perception.

“You might see a Hitler and think ‘let’s just get rid of him’ but he’s part of the fog and the fog is into everything. Who would we kill to stop all of this? One chancer who seizes an opportunity? Someone else will just step in, and who knows where that’ll lead you.

“The fog is already creeping up on you but you haven’t seen it. There are all sorts of things happening that create a complex environment a few years from now. Politicians are sowing the seeds of public distrust through their financial arrangements. Bankers are dreaming up more and more elaborate financial tricks whilst being held by less and less regulation. The public lurches further to the right as they all sign up to become Little Englanders, keen to buy and then protect their piece of the pie. That’s just the headlines. Meanwhile, through luck rather than design, the group who can profit from all of this are slowly building up their numbers. There will be a series of events that will bring this into focus. Distrust in established politics. Financial turmoil.

“We think you can win those contests. We then need you to be the lightening rod. What we need, to weather the storm, is for you to provide a credible alternative. People will be scared and angry with the status quo and that makes them do stupid things. Like make protest votes. We need you to be the person those people put their trust in. We want you to speak up for fairness and equality while you do it, and we want you to draw out the poison. It will take a few years but you must stay on course. We need a viable third option otherwise there is a vacuum for the protest vote. We trust this to you.”

She places a piece of paper on the desk.

“On this piece of paper are a few results for sporting events over the next few days that will prove to you that you have been visited by a girl from the future. The thing about sci-fi tropes and clichés is they have some practicalities to them.

The TV is on silent but the subtitles roll all day over the breaking news on TVs in all corners of the pub so she knows how things are developing. The news has tried out a number of new phrases over the past 24 hours. The latest being “triple lock”. There is a concession speech, raw with emotion. Even through subtitles it hits her hard enough to bring a few tears. Then she sees him joking in a rose garden, and knows she has work to do.

At home, to the wardrobe, she pulls out a bomber jacket and takes an envelope out of the pocket. The envelope is marked “Plan C”.

He opens the door to the study and turns the light on. There’s a woman behind his desk.

“Hi,” softly, but with clear intent “I knocked the last guy out but something tells me you’ll listen. Will you listen?”