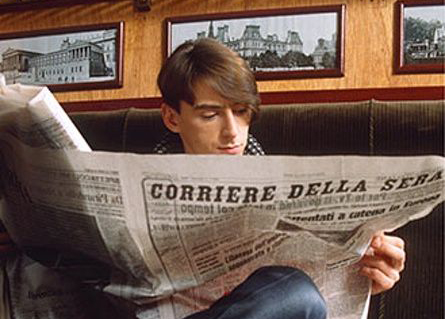 Patriotism is a funny thing, the attachment to flags and borders. But your country is your home (whether by an accident of birth or choice) and historically, culturally you can see why people identify with it. Patriotism need not be any more dangerous than community spirit, picking a team to support.

Patriotism for one’s continent seems a little further stretched, especially an amorphous one such as Europe. What are those shared cultural values? In Europe the shared history seems mainly about being at war with each other in different combinations. But for many, European is the acceptable face of patriotism: there are people who identify more as European than English. This happens in England more than the rest of Britain, because Englishness is confusing, fragmented, problematic and tainted by nationalism.

A little of that euro-love grew in the excitement and openness that Europe provided in the first years of easy and cheap travel around it, a little in the spirit of the original mods: signalling that you were voraciously absorbing new and smoother cultures, Fila and Fellini, rather than Findus fish fingers. But also Europe was used by many to signal that they weren’t party to the awful parts of English patriotism, which had come to be represented by the Union Jack.

It’s a useful identifier, being ‘European’, part of a smorgasboard of identities we have been lucky enough to pick from in recent years. I could tell you I’m from Birmingham, the West Midlands, England, Britain, or Europe and can attach more or less importance to any of them at any time. Five different ways of thinking about what home is, that overlap and are interchangeable with each other when needed. But the attachments aren’t to the statutory ruling bodies or organisations, they’re to the people, history and culture. I don’t want a West Midlands Combined Authority T-shirt, or wear a Birmingham City Council Twitter avatar.

As the great cultural theorist Stuart Hall says more precisely in Cultural Identity and Diaspora,  “our cultural identities reflect the common historical experiences and shared cultural codes which provide us […]  with stable, unchanging and continuous frames of reference and meaning, beneath the shifting divisions and vicissitudes of our actual history.”

It’s easy to see why people would define as European. It could be argued that leaving the EU would make you feel less ‘European’, even though the EU is “actual history” rather than “common historical experiences and shared cultural codes”. But it’s noticeable that there are people who identify strongly with the Single Market.They are in effect using a vociferous attachment to a set of international trade treaties (surely “shifting divisions”) as part of an identity.

(Yes, there are many reasons you may feel that being within the EU is better for the county too – and you’d be right, a stupid referendum, a daft question, called by the worst prime minister the UK has had.)

The Single Market, and the ho-ha produced around Chuka Umunna’s Single Market Queen’s Speech amendment seems a strange dividing line to take. We know why Chuka did it, but for others there is a failure to understand his reasons and use it  It was an amendment that differed only from Labour’s official amendment by calling to be ‘in’ the Single Market, as opposed to (working to get) all of the benefits of being in it, but without actually being in it. With these two amendments, Labour MPs were offered two choices – both amendments equally unlikely to pass, it has to be said – but from some remainers watching this, there was enough identity or feeling for membership of a treaty to make it worth backing Single Market membership as a thing, undermining a Labour party in the ascendancy.

Outside Parliament, there are commentators and others that shout ‘betrayal’ at any idea of leaving the European Union and Single Market at all: crucially, even if it safeguards as many of the rights and benefits as possible. The Labour manifesto proposes staying in the policing and security bodies, Eurojust and Europol, continuing European Arrest Warrant arrangements, maintaining membership of Euratom and the European Medicines Agency safeguarding health and some science research (and hence keeping the ECJ), remaining part of the Erasmus scheme, as well as guaranteeing the rights of EU citizens in the UK and Britons abroad right away. Workers rights, food protections, tax justice, environmental protections as well – it can be argued that Labour’s position is optimistic, it can be argued that in its nuanced detail it isn’t clear, but it it’s hard to argue that it doesn’t give the people of the UK almost everything the EU does, and perhaps the opportunity for more.

It seems that some of the most vocal remainers are not really sure what Brexit is or means, as it is surely part of those “shifting divisions”, but are using their position to signal opposition to the distasteful and awful ideas expressed by those who define themselves as ‘against the EU’. Brexit-signalling from all sides is pointless, and much of the reason that the debate is refusing to move on to the detail we need.

It’s easy to use who supports an idea as a shortcut to picking a position. That Farage, Hopkins, Banks, Gove, and their ilk were pro-Brexit made it easy to be against: in the referendum campaign it was the first thing I did too. My understanding evolved, but not enough to swap sides on a binary vote. The vote has to be moved on from now, and moving on from re-running that decision is more complex – because, hell, the details of international trade and borders, and residencies and transport of fissile materials for health purposes and economy are complex. You don’t have to do all the research yourself, but berating the side you picked for not offering simple solutions isn’t helpful. There are no simple solutions, and anyone who offers you one is either lying or a fool.

If Farage et al were just against the EU, but not also vile racist bigots, draping themselves in a flag, would people feel the need to separate themselves from them quite so much?

Are the vocal hard remainers, particularly those in the media, really against Brexit, or against what Brexit has come to represent? It has come to represent small mindedness, anti-foreigner attitudes, and a lowering of horizons, an unrealistic nationalist idea of a future that is a better past – let’s call that racism and poverty, because it is racism and it is a poverty of thought as well as pocket. It’s easy to see why you would be against that.

We need detailed positions on Brexit as the Tories can be rolled back on their foolish positions piece-by-piece, as they see how wrong a complete break would be. If the UK were eventually to stay in the EU, or even to keep enough connections to make a return possible, then it will be by arguing point-by-point.

And even then, we still have all of the social problems to deal with. The EU is not the answer to racism or poverty and there are better ways to define yourself as against racism and poverty, and Farage and Hannan, than clinging to the EU as identity. Neither ever went away in the UK, no matter how European some of us felt.