I think I was a few weeks ahead of some in calling the referendum campaign the triumph of post-truth politics that was just as much a fault of David Cameron as the referendum itself was. Jonathan Swift was much further ahead of the post-truth politics game, as in most things: “the greatest liar hath his believers,” he said,”and it often happens that if a lie be believed only for an hour, it hath done its work [ …] Falsehood flies, and truth comes limping after it.”

It’s no longer the case that the truth will eventually get its boots on and catch up. For a time it just seemed that the truth needed to up its game, get a pair of slip-ons, get a better narrative, frame the debate: the truth now is on a continuing 24-hour cycle of being shouted down and tripped up. There is only one truth, it’s sometimes complicated or nuanced, there are many more lies — as many as you have space for in the media and on the internet.

And you might think that there are a lot of column inches to fill in the newsagents, but that’s just peanuts to the internet.

So we need a new rhetorical term for the act of deliberately spreading a lie confident that, even if one is made to recant, the false ideas will be spread even more widely and believed.

The masters of this are the political class, from Iain Duncan Smith’s assertion of whatever statistics he fancied on social security, to the £350 million the Leave had in their change jars for the NHS, to whatever takes the fancy of the ‘sensible establishment’ of Labour to say to try to hide their policy nakedness.

Tessa Jowell can claim homophobic abuse at a party meeting, but the evidence from the chair that it didn’t happen doesn’t get the same traction. Yes, people have a tendency to believe what they want to believe but there is also something more than confirmation bias going on: it’s down to sheer weight of numbers. The retweet figures of Jess Phillips’s untruth about the voting record of her Shadow Chancellor, tell the story: vastly more for the untruth than for the rebuttal, fewer still for her refusal to correct 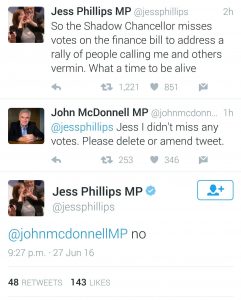 Like Waterhouse’s Billy, the liars always have a new story. The difference is that they have already got on the train and hit London where they have jobs in Westminster. Unlike newspapers there is not even a toothless body to force them to issue a tiny retraction.

We need a name for the phenomenon in order to combat it, and this is intentionality: it becomes easier to talk about and face the problem when we can easily identify it. For all their protests, and claims of balance from the BBC, the media is unable or unwilling to do the job – and without a way of describing the behaviour this will continue.

For all its connotations of being used to shut down debate and for all the subsequent misuse ‘mansplaining’ has done the job in helping to highlight poor attitudes – and similarly we need something to call out the barrage of shifting, evolving lies. We could call it ‘lying’, but for some reason our political sphere is nervous of the term. ‘Misspeaking’? It’s on purpose.

The soft, pernicious splat of the lie after lie, covering debate like the cream from a Bugsy Malone splurge gun. The spread of a falsehood virus, evolving ahead of the vaccine, zoonoses, able to transfer from political animals to normal humans without any of the mucky Cameron-interface business. They must be stopped: but before we can manufacture a retroviral we need to isolate the problem.

Call it ‘ponzing’, for these are ponzi schemes of lies built on fibs, built on untruths, based on damned lies, statistics and batshit assertions. and if the liars get really stuck they can just dos off humming to themselves. Handily this makes the perpetrators ponzis: and you can guess how I’m pronouncing that.